Suliman al-Khatib, from Hizme (about half a kilometer from Jerusalem), and Uri Noy-Meir, from the Galilee region of northern Israel, explained their respective stories and how they had come to join Combatant For Peace.

Al-Khatib talked about the negative impact that the Israeli military had on him during his formative years. By the age of 12, he had already joined Yasser Arafat's Fatah movement and was throwing stones and Molotov cocktails at soldiers, as well as demonstrating in protests.

He related that he tried to keep his actions a secret from his parents, who he said would not have condoned his actions, even though they likely agreed with his overarching political stances.

When he was 14, in concert with a friend, Al-Khatib stabbed two Israeli soldiers. He was apprehended and sentenced to 15 years in prison. He said that his time in prison was initially very difficult, both because of the specter of the spending more time in prison than he had, to that point, been alive, in addition to the behavior of the guards.

Yet, he soon acclimated to the system and began to gain an understanding of the internal politics of the prison, which he described as being as complex as the brand of politics practiced in the outside world.

In his prison, there were representatives of various Palestinian groups, ranging from those that espoused Communist ideals to those that were hard-line Islamists. Expectedly, there was a good deal of fighting amongst the groups. Yet, there was also cooperation.

Al-Khatib noted that the Palestinian groups would stage coordinated protests inside the prison. Sometimes the protests could be as simple as not saying, "good morning" to the guards during the daily morning roll call. Other times, more serious actions, such as food strikes, were undertaken.

He said that these protests were a "game" in which both the prisoners and the guards knew the rules. A certain tolerance for protesting was tolerated up to a certain threshold, the specifics of which Al-Khatib did not specify.

This understanding between the guards and prisoners also extended to other facets of prison life, such as communication and elections. Palestinians prisoners were able to keep in touch across different prison sites, and with Palestinians on the outside, via a method that would be easy to detect, if the guards were so inclined. But, as Al-Khatib explained, they, de facto, allowed it to continue.

The guards extended a similar, tacit level of support towards internal prisoner elections. Described by al-Khatib as "secret", and most certainly illegal, the guards also looked the other way with regards to this. Al-Khatib did not give a reason as to why the guards chose to exercise leniency in some cases but others.

Another way in which prisoners from differing political groups cooperated and interacted with one another included education. Al-Khatib said that prisoners taught each other subjects about which they were knowledgeable.

Later in his sentence, Al-Khatib worked in the prison library. While there, he started to read about the history and culture of the Jewish people. This research, along with the learning groups he attended, and his interactions with the Israeli guards all worked together to change al-Khatib's way of thinking about the conflict.

After being released from prison after more then ten years in prison, al-Khtaib began to work, non-violently, towards a resolution to the conflict, as he continues to do today.

Uri Noy-Meir grew up in northern Israel and, despite the Israeli Arab communities that were situated nearby, he recalled having little contact with Arabs throughout his childhood.

Noy-Meir was also impacted by violence early in his life. On a trip to Tel Aviv's Dizengoff Mall with his family in 1996, he saw and heard a suicide bombing which killed 13 Israelis and wounded 130 more.

Like most Israelis, at 18, he went to the army. Noy-Meir said that he was not excited to go. Still, as a healthy male, he was assigned to a combat engineering unit which operated in Gaza.

In the course of his time in the army, Noy-Meir's unit lost four men, including his commander.

He said that the army has its own "illogical logic" and by the time he completed his service, Noy-Meir had many mixed feelings about his service. These feelings were further complicated by the fact that Israel decided to evacuate the Jews who were living in Gaza only a year after Noy-Meir was discharged. Because of this, he began to ask himself questions like, "Why I there (in Gaza)?" and "Why am I alive and the other guys in my unit are not?"

Noy-Meir said that both the army and Gaza were so bad that he just avoided thinking about it during and after his service. In hopes of beginning to address this problem, he studied theater as a means of therapy.

This led him to the Theater of the Oppressed, which was created by Brazilian Augusto Boal in 1960's with the aim of bringing about social change. Today, Noy-Meir utilizes these techniques in performances and demonstrations against Israeli control in the territories.

Combatants for Peace organizes many events as part of their mission to increase dialogue on both sides and end Israeli control of the territories. Along with discussions, many of which are private, they also organize direct actions such as protests and attempts to impede Israeli government directives related to house demolitions, road blocks, and land disputes.

One of their most controversial events was the joint Memorial Day ceremony, which recognized both Palestinians and Israelis.

Combatants For Peace has been criticized by many on the Palestinian side for furthering a policy of "normalization" with Israel. It has also been critical by Israelis across the political spectrum for solely focusing their actions and events on the government and people of Israel, while essentially ignoring Palestinian terrorism and incitement. 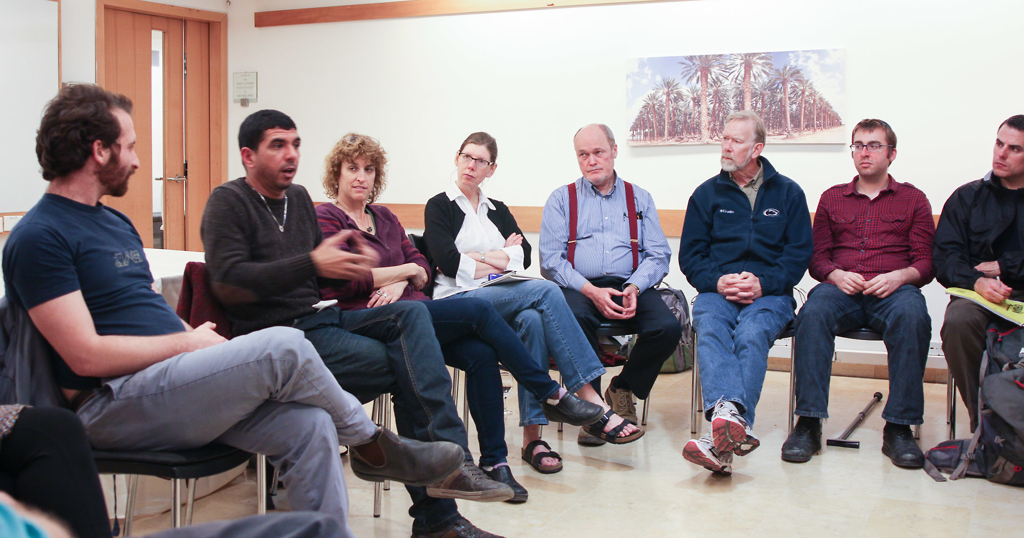 Suliman al-Khatib, with Uri Noy-Meir looking on, talks about the time he spent in Israeli prisons with an American audience. 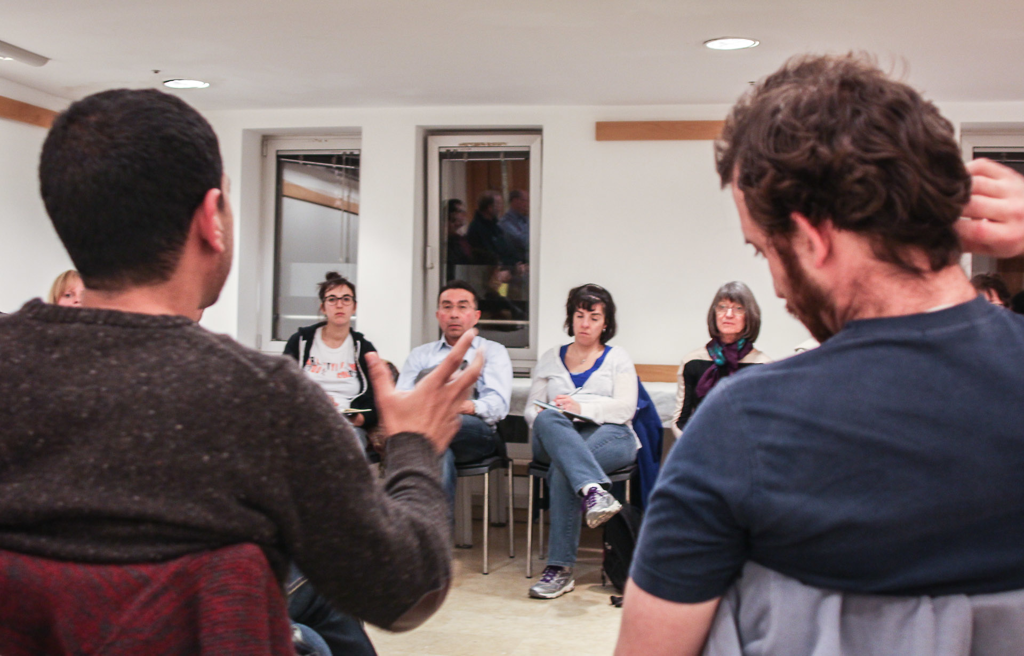